Reprinted from A Place For Mom

Despite an increased emphasis on personal health and fitness, a 2016 report by the United Health Foundationfound that America’s baby boomers are actually unhealthier than their predecessors. Adults between the ages of 50 and 64 in 1999 were healthier than those in that age group in 2014. Although these new seniors smoke less, they will be “entering their senior years with higher rates of obesity and diabetes, and lower rates of very good or excellent health,” the report concludes.

Retirement communities are taking it upon themselves to combat the health epidemic that’s facing seniors. From Emerald Court’sfocus on improving posture and balance to prevent the risk of a fall through its Stand Strong program to Brightview Senior Living’sSPICE program, which is the foundation of ongoing wellness efforts and the model on which resident programming is based (SPICE represents five holistic elements of wellness: spiritual, physical, intellectual, cultural and emotional), innovative retirement communities across the country are going beyond exercise to take a holistic approach to senior health.

Movement for Seniors of All Abilities

When Benton House piloted and tested the Ageless Grace program, its staff was impressed with the program’s focus on the body, but also on the mind. Geared toward the needs of all seniors, but especially those who can’t get out of a chair, this accessible exercise program is done sitting down, and the results have been “powerful to see,” says Ginger Fronebarger Couch, Regional Director of Community Relations for Benton House. “It’s a good program for seniors who can’t stand up,” she says. “They still move their arms, practice breathing, sway to the music and move their legs. To see people who can’t do a rigorous exercise regime get moving, but more importantly be engaged and entertained, is powerful. It wakes their spirit and gets them up and moving.”

The guided imagery and movement of Ageless Grace has brought seniors in Benton House’s memory care communities to life. “Even if the participants can’t remember the mental cues, the program brings joy through the music, which can be so powerful for them,” Couch says. “Music is a powerful thing, it works very well for these folks.”

Seniors with dementia, Alzheimer’s and Parkinson’s have been extremely responsive to the program, which operates as a half-hour to one-hour class taught by staff members who have received the Ageless Grace training. The class starts with breathing, then seated exercises that include simple arm and leg movements, and ends with a meditative breathing session. Not only are seniors stretching and moving their joints, they are also practicing coordination and movement to music, which offers an important cognitive element.

The program is available for free within the Benton House communities, but staff have also started taking the program to the community at large, offering it for free at local nursing homes and senior community centers, because they believe so strongly in its physical, mental and emotional value. Ageless Grace, which has been running for a year now, has become an important part of Benton House’s physical therapy program, and is a great way for staff to encourage residents who are isolated or lonely to get out and join the rest of the community.

Recognizing that seniors are not looking to sit around and grow old gracefully, CareOne newly devised Forever Fit as a way to help its community stay active and maintain a quality lifestyle. Seniors who struggle to manage illness and mobility are at risk of limited social experiences, which can cause feelings of isolation and depression. But it doesn’t have to be this way.

“People are more mindful that getting older doesn’t have to mean feeling older,” Patricia Chiorello, VP of Communications and Business Development for CareOne explains. “Aging isn’t a process where you feel like you’re ‘getting older, so what do I have to give up.’ We wanted to design a program that would help our residents stay as active as they can and as great as they can.”

CareOne’s Forever Fit program offers an individualized strength training and fitness program for older adults that’s combined with nutritional guidance, and traditional and non-traditional wellness treatments including physiotherapy, massage, yoga, meditation and even Reiki. The Forever Fit program provides seniors with a physiologist, dietitian and physical trainer for one-one-one programming that assesses a senior’s existing health and fitness level, and designs an individualized strategy that will help meet wellness goals.

The holistic focus helps seniors take fitness a step further than just exercise. Whether they’re meeting with a nutritionist, doing a group fitness class or having a one-on-one session with a physiotherapist, learning how to live healthier lives is paramount.

CareOne isn’t alone. When it comes to fitness, the trend among senior living communities is to take a holistic approach to health – one that looks beyond exercise. And what’s the result of this individualized approach to health? Residents “feel motivated and empowered,” Chiorello says. “We’ve already seen significant gains in health across our communities.” 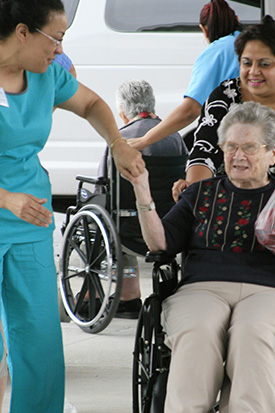